Between the Word and the Chaos of Colour-and-Line

Karolina Ptaszkowska, like most of us, lives at an intersection of things, somewhere in an eternal in-between. Such a perspective usually creates tension in life and requires a person to constantly take sides, although it is clear from the start that no permanent affiliation is likely to emerge. This situation, typical of our modern lives, seems to be a knot that cannot be untied, a black hole that pulls us into the abyss of a permanent lack of definition, a place where everything—every action and every gesture—becomes overly complicated and generates an avalanche of unpredictable consequences.

This state of being in between things is visible at almost every turn in the case of Karolina Ptaszkowska, starting from the very fact that she is a Pole living and working in Britain. The landscape of visual, textual and musical references in her work is predominately based on the English language and deeply rooted in British culture at many levels. The artist is well versed in these references. She clearly feels comfortable making them and uses them freely. She appropriates, remixes and assimilates these references, while at the same time building her own intimate world. However, a closer look at her work reveals references to Polish design and handicraft as well as affinities with the work of Polish interwar artist Zofia Stryjeńska. This creates an interesting sense of tension that becomes the structural principle that underlies and formally organises the entirety of Karolina Ptaszkowska’s pursuits as an artist.

The works showcased at the exhibition, along with an accompanying online intermedia poem, offer an insight into Ptaszkowska’s life as a woman, an artist, and a working person subject to specific social and economic requirements. Her erudition and rich imagination are where she can take refuge. At the same time, it is an ephemeral, fragmentary space where everything is intertwined with everything else and undergoes constant transformation in an endless “inter-subjective dialogue.” It is an area of constant struggle in which various elements of the artist’s personality battle for domination, with the external world intruding to have its say.
On the one hand, this requires constant productivity, “usefulness,” and readiness for action. On the other, it demands social responsibility, precludes locking the world out in a quest for privacy, and highlights the broader meaning of each gesture. It’s not surprising that such a situation is often compared to something from the horror genre.

All this commotion is reflected in the visual layer of Ptaszkowska’s art. One characteristic feature of the showcased works is that they form a certain mosaic. Her clearly outlined shapes, gestures, lines and patterns often seem to be aimed at a specific purpose, only to suddenly veer off target in response to a thought or strong emotion. But the chaos is an intended choice. It harbours traces of some old order, a well-organised system of the past—faded but still perceptible. Sometimes, as in optical toys, abstract curls and patches of colour upon closer examination reveal a well-thought-out composition that echoes some familiar objects—a painting by Caravaggio or a work by Stryjeńska.

Karolina Ptaszkowska is a millennial (though she never uses this word to describe herself), and the tensions visible in her art subtly but clearly express the condition of a woman artist of her generation. Economic pressure and a constant drive to assert one’s usefulness to society rule out rest and relaxation. They make us forget the romantic ideals of the creative process, simply reducing art to just another profession—something to which Ptaszkowska does not want to succumb entirely. The mosaic form of her art is also indicative of her generation. The artist is a frequent visitor to the digital world, where she finds herself at ease navigating through the maze of chaotic information. She collects, catalogues and transforms it in her own fashion. Her art gives the impression of a gigantic database, a collection of hypertexts, where each item refers to another. They seem to be unrelated, but they form a coherent—though never complete—fascinating whole.

The artist’s professional endeavours are not limited to painting. In line with the mosaic principle, she also reaches for other media to express herself. Literary titles and the stories behind them are an integral part of her work. Sometimes the word becomes an integral part of her visual compositions, as in her online “poem.” It retains its meaning, but at the same time becomes something else, testifying to an intriguing interplay of modernity and tradition. The result resembles the structure of a website, while also bringing to mind the visionary works of poet and painter William Blake. Combined with its astral motifs, this feature of her art gives the painter’s intimate works an unexpected cosmic dimension.

A key aspect of Ptaszkowska’s work is an attempt to overcome an impasse. Her work is by no means a lamentation over the state of the world or a complaint or protest. Although it contains critical elements, it is surprisingly affirmative in nature. The painter turns her undefined position into an asset, celebrating her in-betweenness as a source of both suffering and large and small pleasures. The unstable, vibrating nature of the contemporary digital world, with all its “cross-permeation, fluidity and chains of synchronicity,” as the artist puts it, seeks a counterpoint in more classic, tangible, sensual, material forms related to the physical work of the hands—permanent and, in a sense, eternal.

At the same time, the artist tends to choose light fabrics and fragile materials, gradually thickening her compositions to the point of a perverse hyperbolic painterly gesture. The delicate nature of the mental processes is reflected in the unstable materiality of Ptaszkowska’s works, and the mosaic-like nature of the digital world is reflected in compositions that are a sum of the painter’s creative constructs. Thanks to this, in Ptaszkowska’s art, features that are normally at odds begin to work together and complement one another—even if only for a moment. 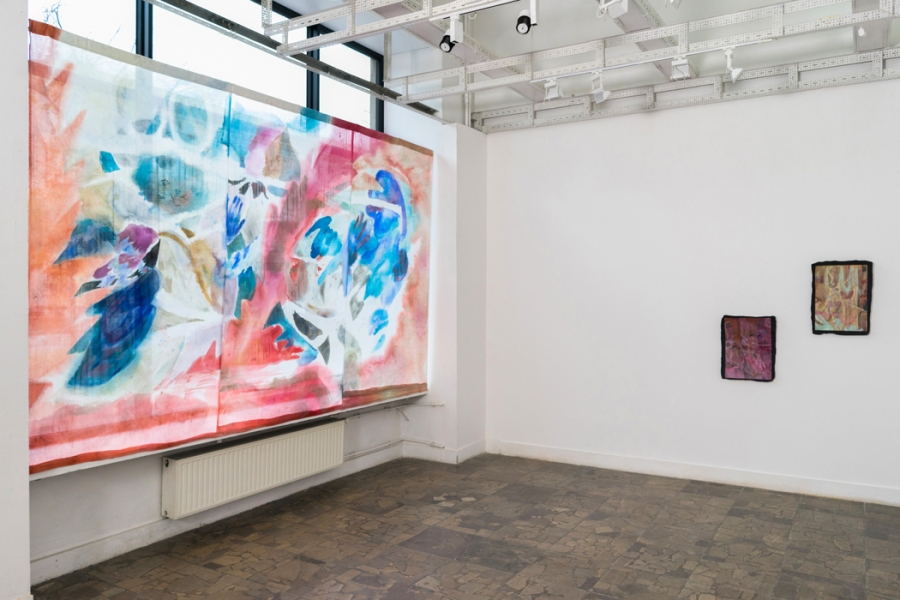 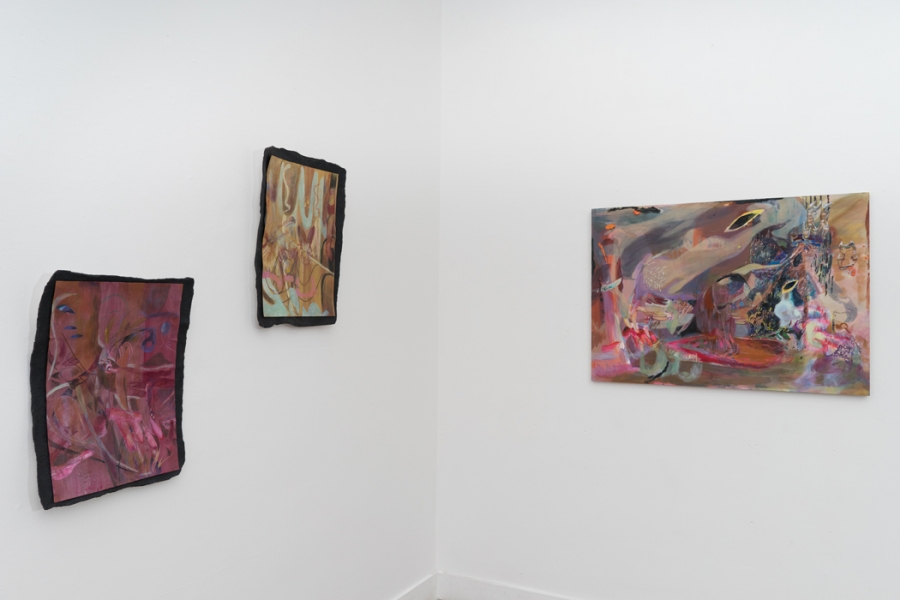 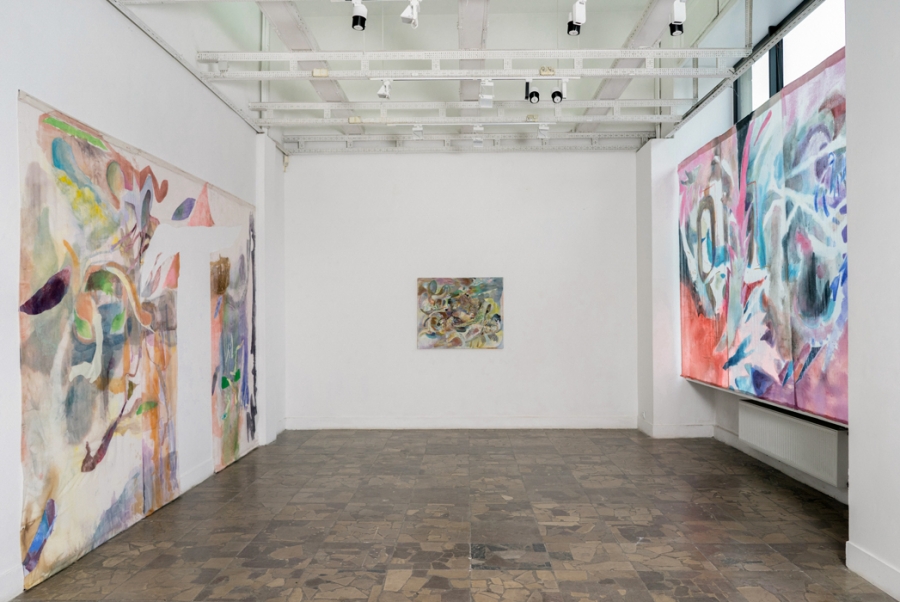 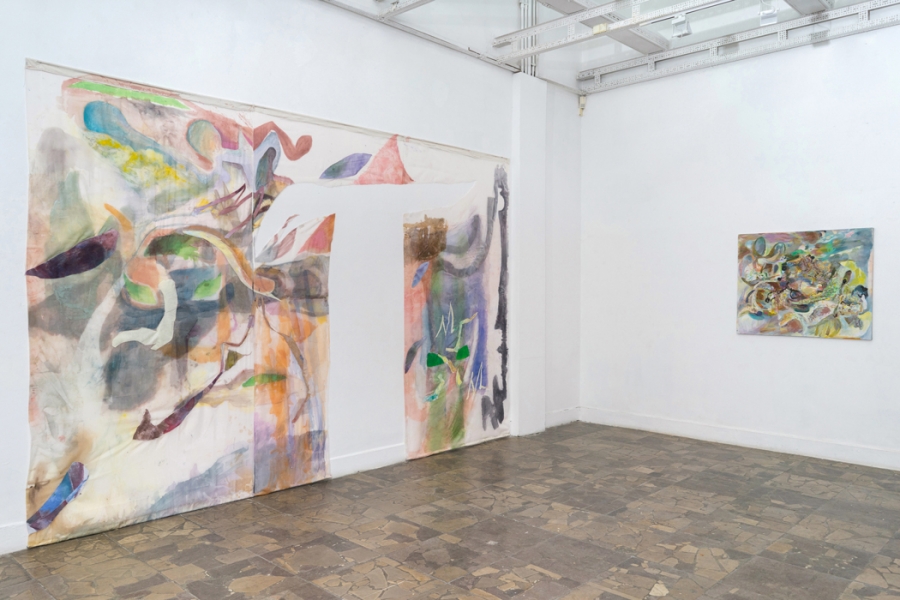 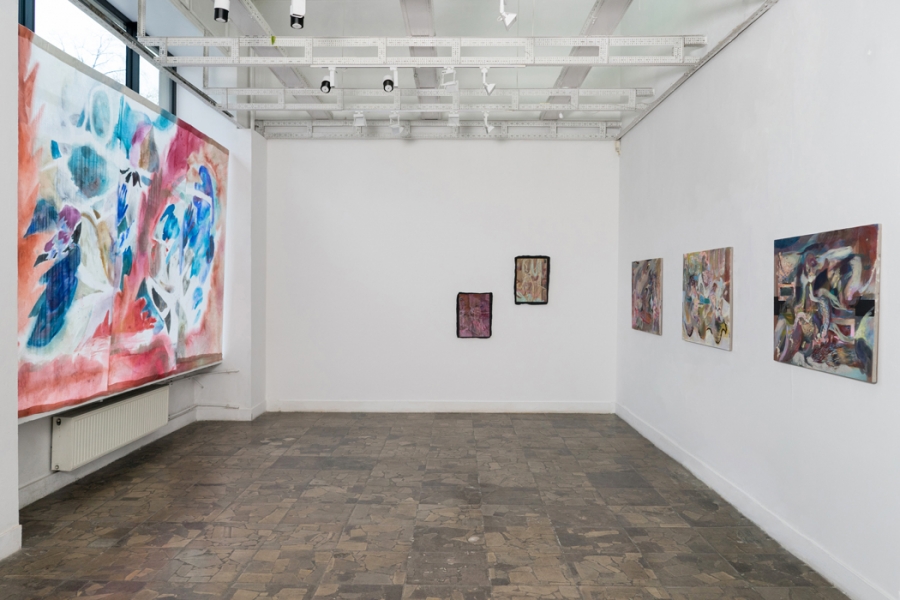 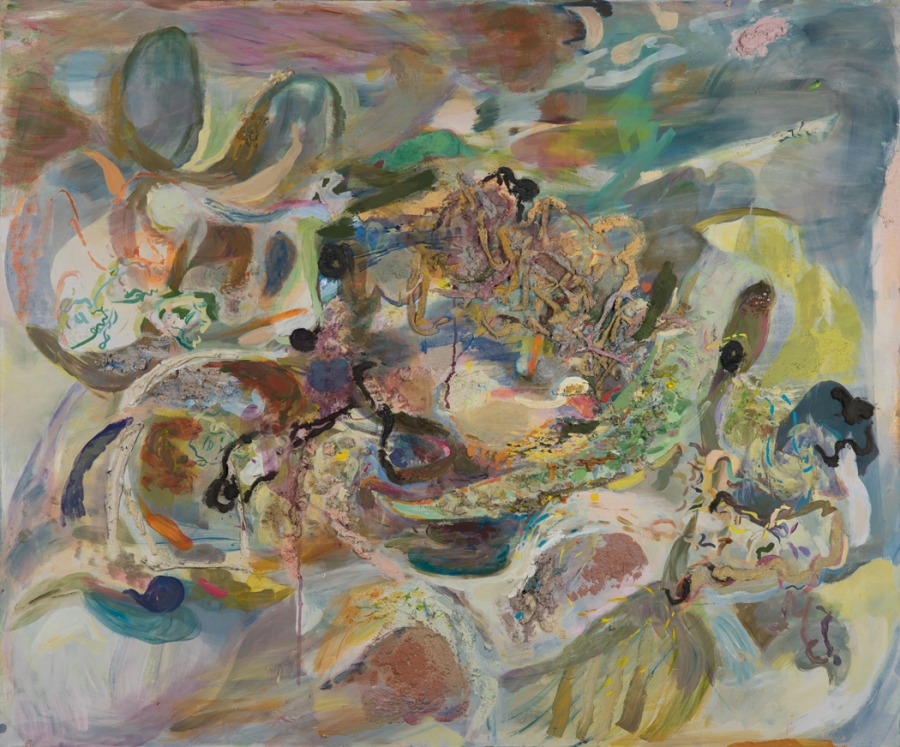 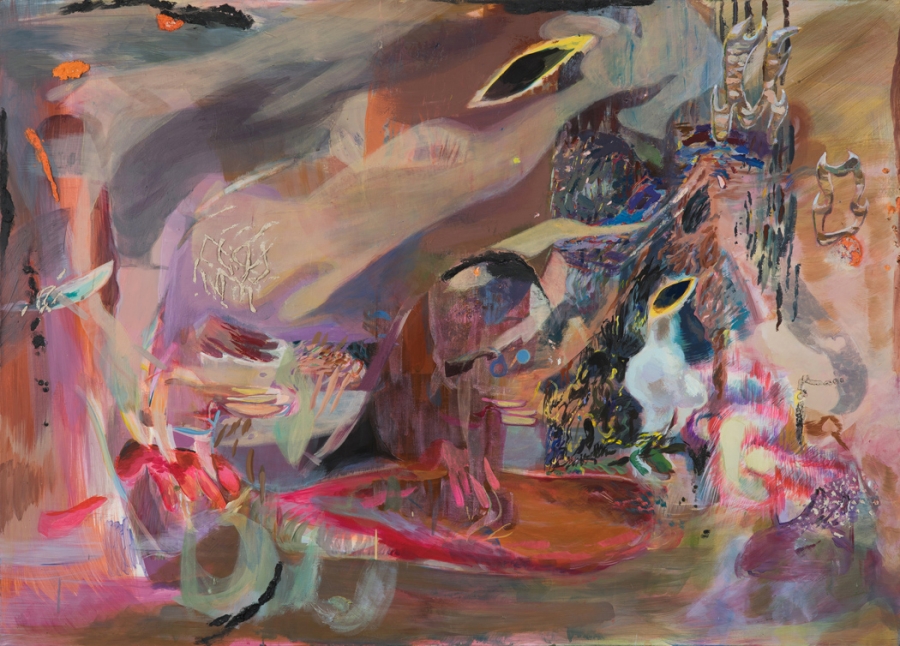 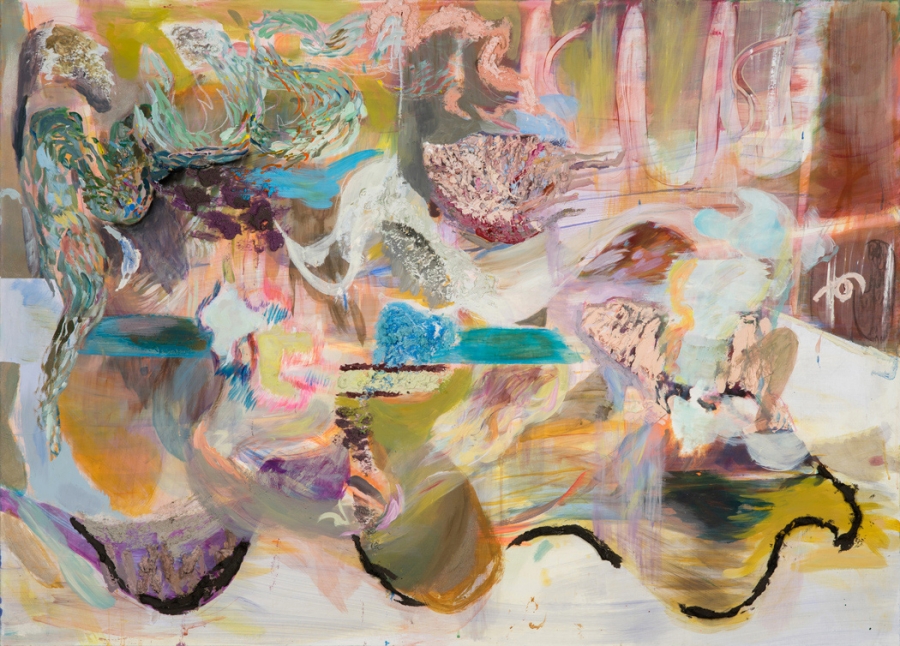 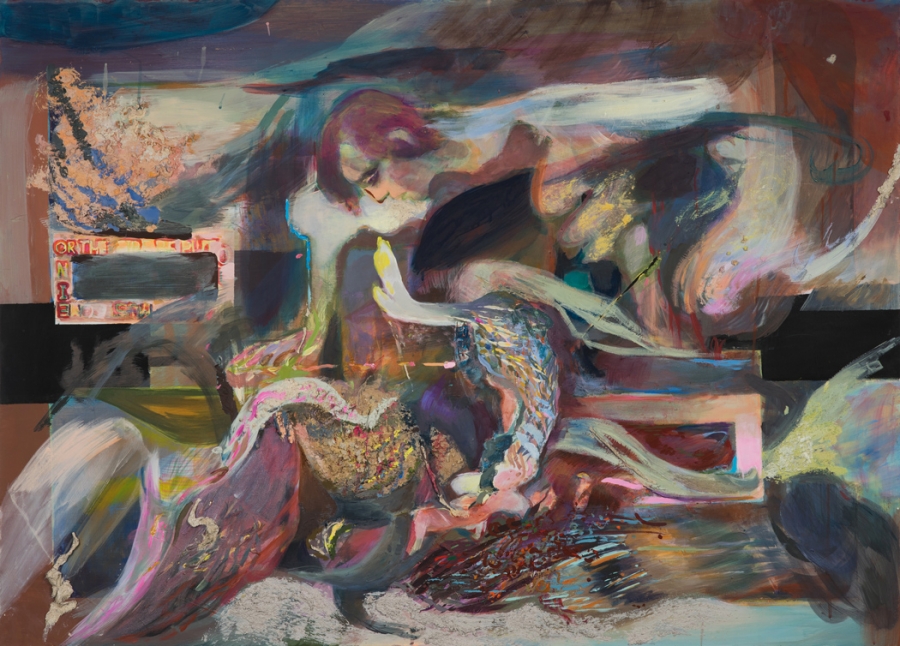